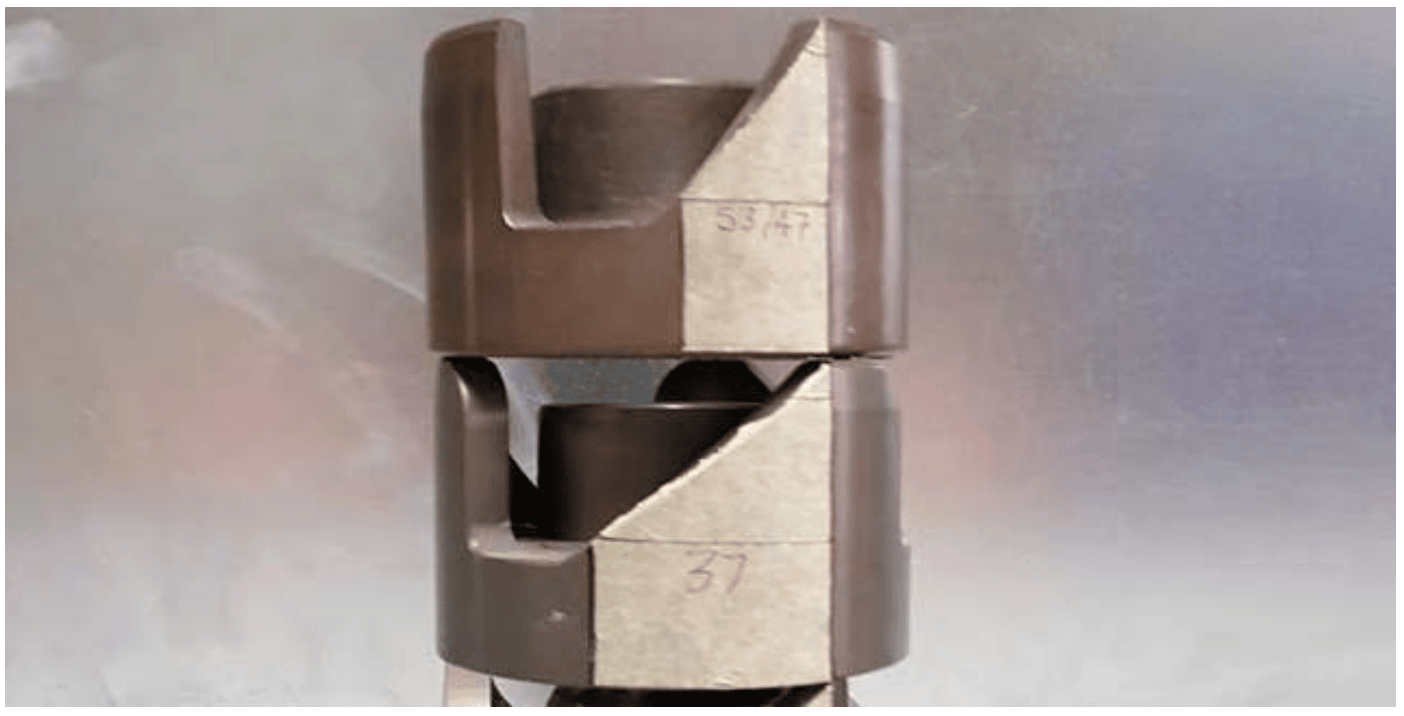 Driver does full throttle in a pull, pulling up a hill or driving down a straight stretch; pipe is heating, power peak rpms is increasing. Driver reduces throttle turning out from getting stuck or to slow down to an approaching corner. Less throttle, means less pipe temperature and the “power peak” moves to a lower engine speed.

The horsepower peak rpm shifts according to pipe temperature.

A multi-angle (progressive) helix takes advantage of the engines moving power peak. As the snowmobile idles, the exhaust temperature is cool and the engines HP power peak rpms is lower. Because of this lower power peak rpm, a bigger helix “start angle” can be used to load the engine appropriately (notice I did not say the word “harder”), taking advantage of the lower power peak. As the exhaust gas heats up from a bigger throttle position, the snowmobile track speed is increasing and the helix angles used, can start to lower. As the speed increases, the secondary wear button or roller travels farther down the helix to a progressively smaller angle.

As the clutch shifts out, track speed getting faster, the helix angle is lowering, matching the moving power peak of the engine.

You might have heard the phrase “Dual angle helix”. A dual angle helix is just that; “dual” expressing two angles. It was common to see in the late 80s to late 90’s “dual angle” helixes. Example 47/44. If the gearing allows 100mph at full overdrive, the 47 degree goes from 0mph to 50mph; the helix abruptly transitions (and you can see the transition) to 44 degrees. The 44 angle goes from 50mph to 100mph.

Question; what degree is used at 61mph?

Question; what degree is used at 20mph?

Question; what degree is used at 88mph?

Question; what degree is used at 80mph?

Question; IF a rule of thumb (in this) is 1 degree can change engine speed by 150 rpms, THEN what degree is needed at 83mph preventing engine speed lowering from 8000 to 7700 rpms?

Aaen ramp rule: The smaller the ramp angle, the higher the side force

IF the engine speed is starting to drift low away from 8000, THEN the primary clutch is pushing too hard, overcoming the belt side force settings of the secondary clutch. To put more side-force into the secondary clutch you can change the helix angle “At-that-track-speed” the engine speed is drifting low. Only change the helix angle(s) at the problem track speed.

The sled sped up adequately with correct engine speed to 77mph track speed and then engine speed started to lower.

Question; what should the “new” helix angles be?

Answer: 50/39…OR…some other fancy helix you can make, substituting a 41 degree at the problem track speed.. 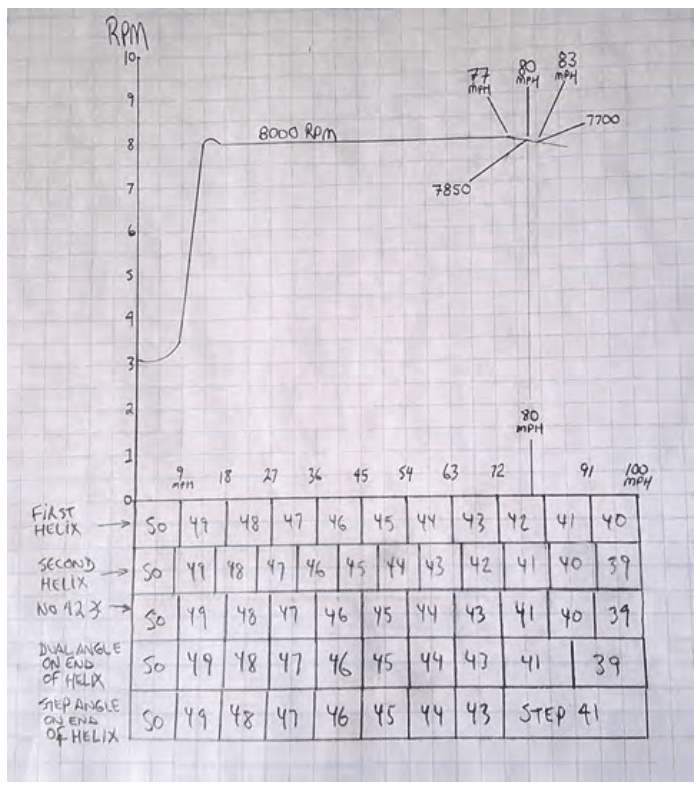 You can make any helix you want if you have the “data” and imagination on selecting “new” angles and duration (length) of them.

Question; Have you made helixes like this Joe? Answer: yes, many of each type you see there (over the years) but we’re missing one that i’ll explain further below “Dual progressive” later….

Step straight is just that. Step of “X” degree for the “A to B” length (in inches) and transitions to “Y” degree for the “B to C” length for the rest of the helix angle. Its basically a dual angle helix with uneven lengths on the path.

You can custom make a “step” any length you want if the helix programmer will do it for you. I’ve made step starts with lengths from 0.3 inch to 0.62 long. Like one sno-cross helix I did a 56 start for 3/8 inch step, transitioning to a progressive 45/38. I made a handful of helixes changing the length of the start from 1/4 inch to 1/2 inch and with the gearing and all the testing we did, the 3/8 inch step start worked best overall for holeshot.

A 53 start, the engine revved up too quick and track spun more.

A 58 start, the engine revved up ok but did not pull hard.

A 56 start give this particular engine the best rpm-acceleration from 5600 to 8600 rpms and won the holeshot.

The length of the 56 was determined by how smooth the track speed would accelerate without fluctuating engine rpms. The data recorder allowed us to figure out the best “rising rate” of engine speed to get to 8600 rpms and adjust the length of the 56 start. 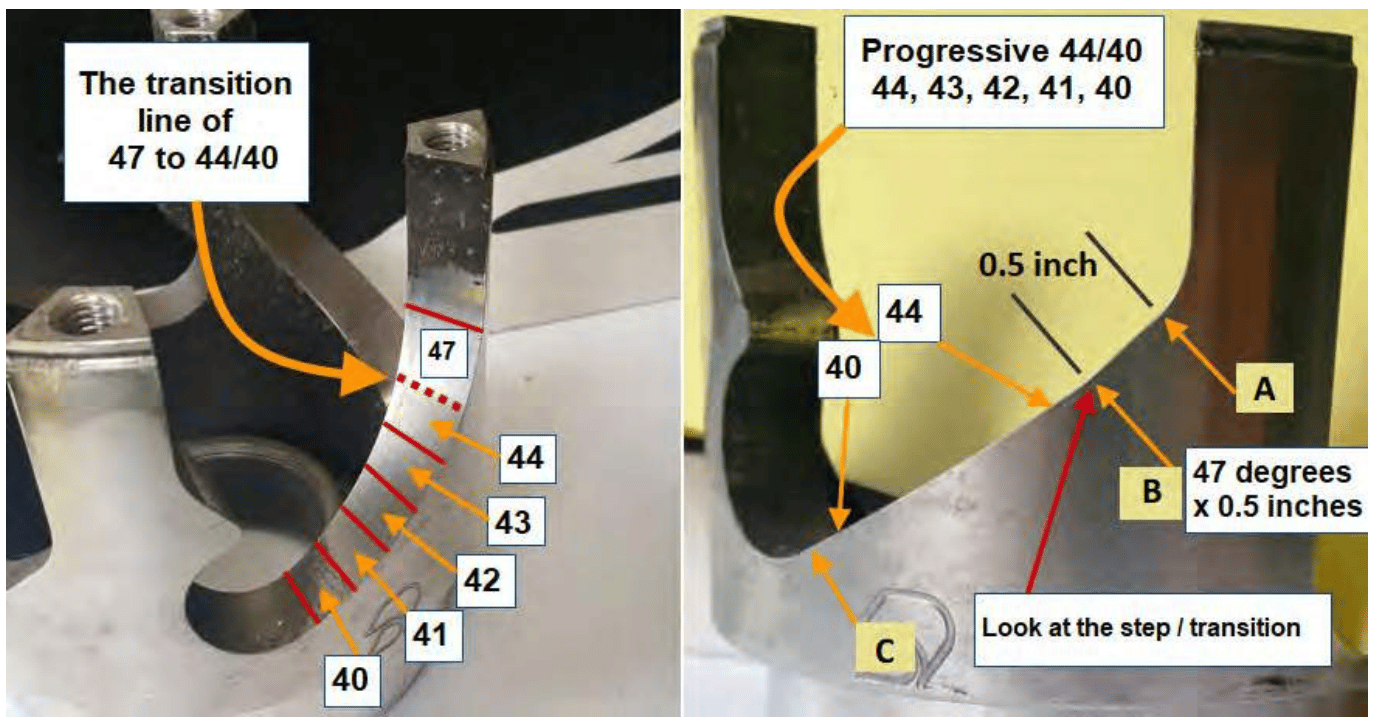 This dual progressive helix has 2 progressive helix angles in it. Jason K at team never made one before until I needed a helix made. (Winter 2014) The first set of numbers (step progressive) was too abrupt for the CAD program. I was trying to make a 47 step start, then transition to a 42/36 progressive. Jason called me up saying the programming did not like what I asked of it to make a that step helix. As we talked, we worked through a set of values for the CAD program to handle/process the transition from the first angle(step) to the second angle. The step ended up being a progressive angle becuase his CAD program would allow the transition. Ok, so-be-it, now Jason knows how to make a “Dual Progressive” helix and team-ind can make them, but there is none in their product guide; you have to request your own custom cut.

This worked good in oval track racing. Angles were good for holeshot and then when the sled running around 3/4 speed to full speed the roller used 38 to 36 degrees which give it really good top end with appropriate gearing.

When there is days with the track being soft, the owner was able to use a little lower engagement speed and combine track 2 to make the start softer and not spin-hookup and rpms drop. The sled could abruptly, but smootly holeshot on a softer, “mushy” ice track. 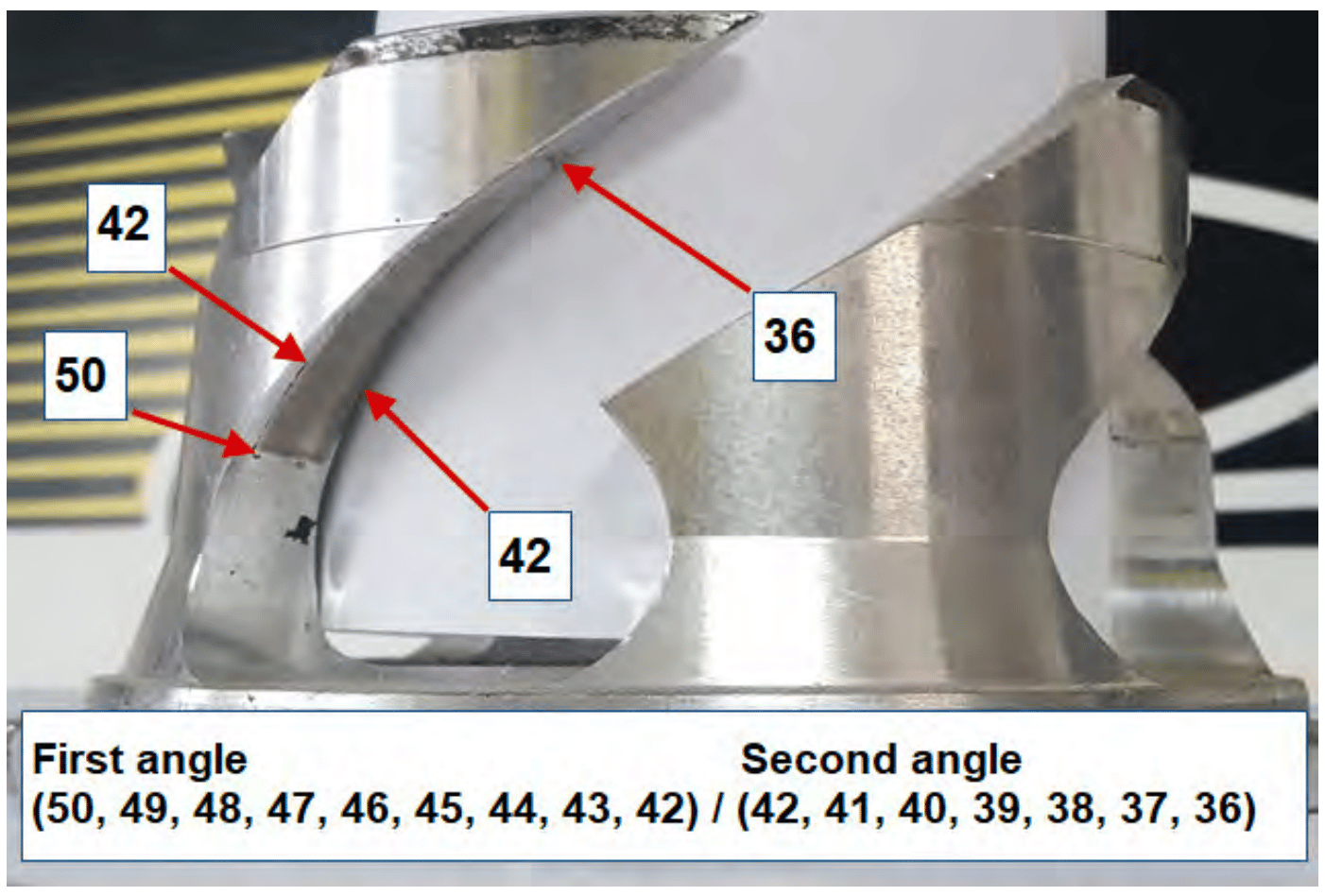 Years ago I made some helixes for a guy cross-country racing a 600REV. The racetracks were 20 to 25 miles long. One driver at a time. Green-light-switch start, radio timed. Most of the racing is in winding trees, creeks, rivers. Speeds would briefly get to 80mph in different places with a straight stretch sprint of top speed near the finish line.

Here is the final helix for him.

The holeshot broken down to get the sled to speed up hardest to somewhere he had to let off the throttle; this 50/47 degree sped up harder than the stock 47/44.

The last part of the race is a brief full throttle run to top end to cross the finish line. Most races, the fastest sleds crossing the finish line was between 85 to 95mph depending on CC class. The 440’s being slowest at 80mph, the 800’s being fastest at 95mph; the 40 degree angle got the sled to be at 85~90mph with a strong pull. If he was able to run a race where the top speed was between 95~100mph; the 38 degree gripped the belt good to achieve 100mph.

Joe, the sled’s fast; I wish my skills were better to use what this 600’s got now. And then after marriage, had two kids and you know how that can kill a racing hobby. Haha.

Random helixes I have in my shop 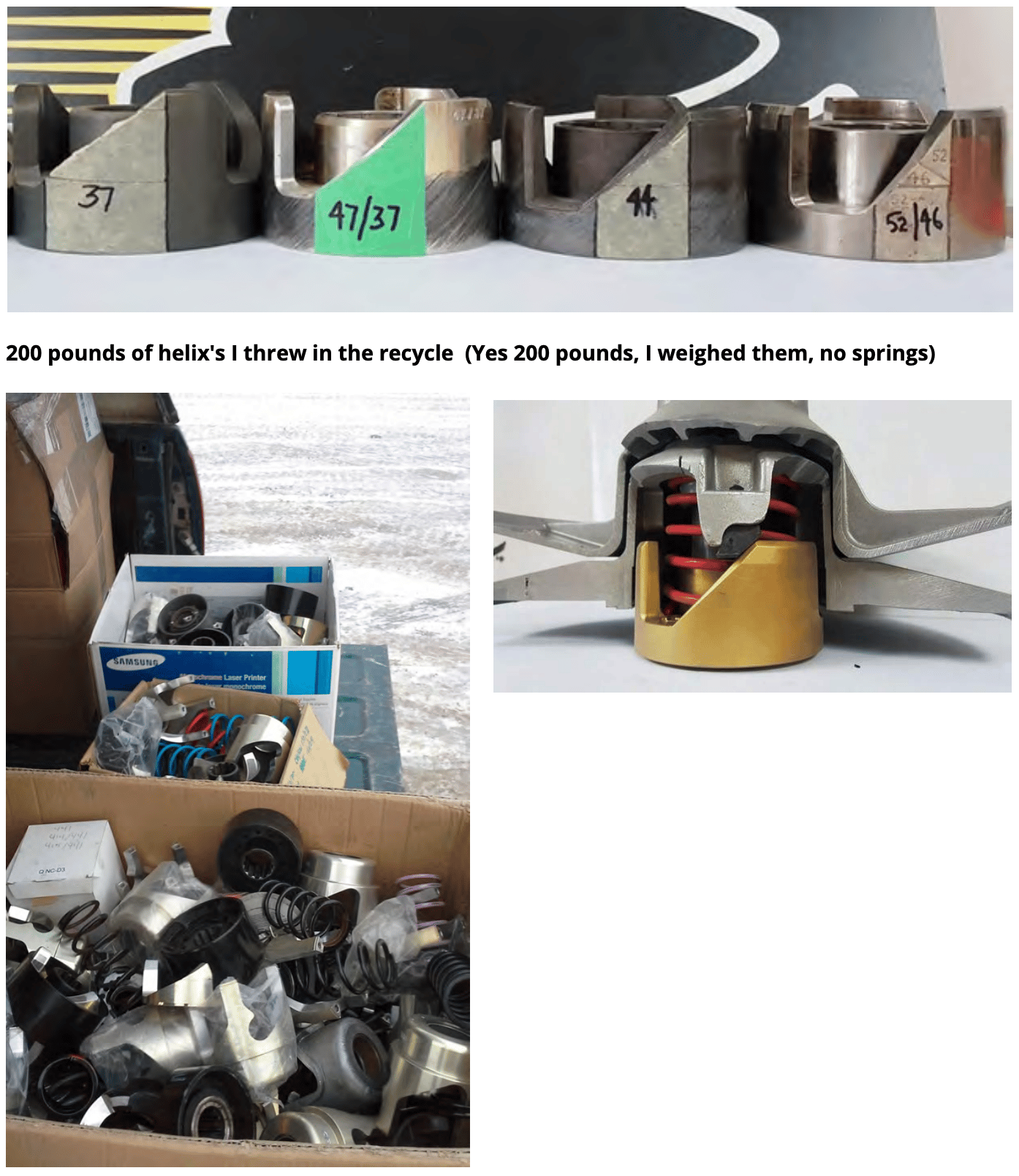